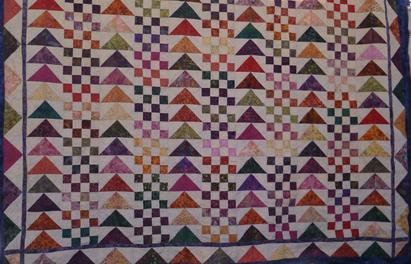 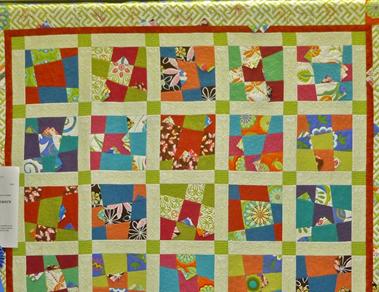 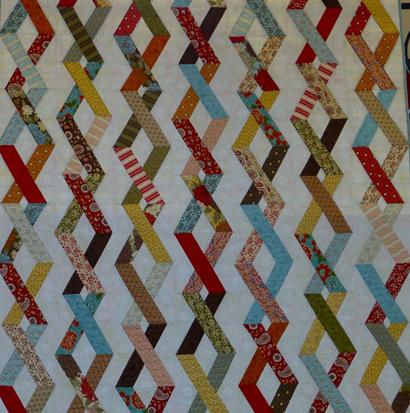 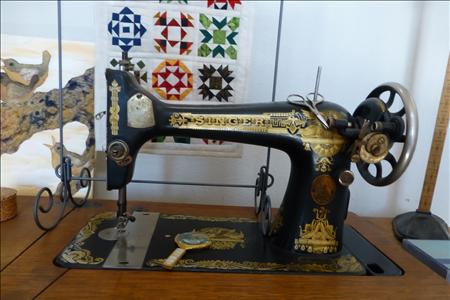 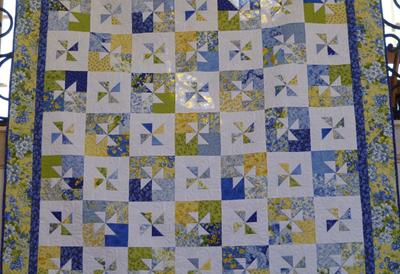 This is my early 1900s treadle Singer "Sphinx" sewing machine. It still works, not that I use it for quilting. Behind it is a beautiful miniature quilt I bought from the Alzheimer's Quilt Initiative, a wonderful charity that raised $1 million dollars for Alzheimer's Research before shutting down.

A shot of about half the quilt I made for my son and his future wife on their engagement. It's a Pat Speth pattern called "Flying to Bali." 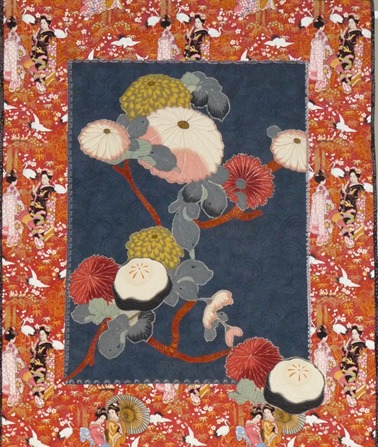 "Bold Prairie Flowers" was an experiment in playing with colors, prairie points scattered throughout the quilt, and non-traditional quilting. I quilted large, colorful flowers of all types throughout the border.

"Japanese Bouquet" is a raw-edge applique quilt based on Jane Sassaman's techniques. 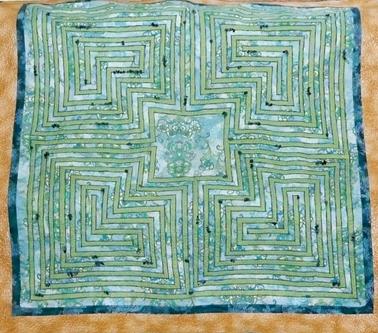 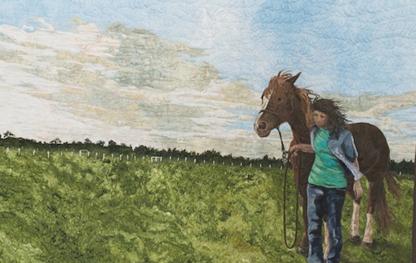 "Labyrinth" is my own design, and it was very hard to do. I never do things the easy way ; > . I cut the green "paths" of the labyrinth out of a large piece of fabric with fusible applied to the back, then fused the entire labyrinth the the blue fabric. The small blue beads represent how different people are at different points in the journey of life.

"Twisted Braid" was made from a pattern in one of the many magazines I receive on quilting. Unfortunately, I no longer have the magazine. If anyone knows the designer, please contact me so I can give him/her credit.

"A Girl's Best Friend" is fused, raw-edge applique, with Seta paints, and thread painting. It's based on a photo my daughter took of herself and her horse, Tabitha on our ranch, Quaker Goats and Horses.

"Geisha With Mirror" is based on antique Japanese woodcuts and was completely done by free-motion embroidery on my Pfaff 2056 domestic sewing machine. 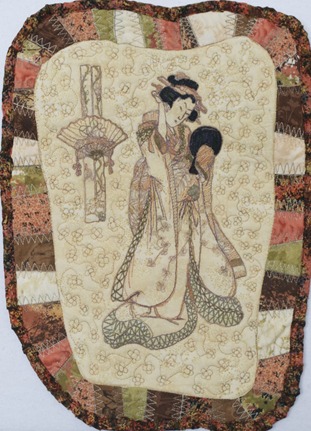 My quilting passion took a lot longer to develop than my passion for writing. My mother sewed everything from clothes to placemats to laundry and toy bags for my kids. She didn't start quilting until later, however. One of my grandmothers was a crocheting wonder, and several of my aunts followed in her footsteps. Not my mother and not me, although I did try to learn at one point. (I have since learned to knit.) My other grandmother made sturdy, functional quilts out of the scraps from her sewing projects. I still have two of her quilts. They are heavy, flannel backed, randomly pieced affairs made of every fabric type she'd used that year. They were also tied, not quilted.

I began to quilt in the early 1990s when it became impossible to keep my needlework clean and untangled when my kids were young. I still like to do handwork and have begun to do more of it recently, but I fell in love with quilting. I like both traditional quilting and art quilting, feeling that there's room for both in the quilting world, despite the tendency to encounter antagonism toward one or the other in other quilters. It's awfully hard to sleep under a beaded, oddly shaped art quilt, and it's equally hard to display queen-sized wall-hangings, although I'm sure both have been done.

Several years ago, I purchased an APQS Millennium and began to do long-arm quilting. I had been doing all my quilting on my domestic up to that point, but I was out-pacing my ability to quilt by my speed of piecing, so I broke down and went high-tech (but I still do everything free-motion, not computer guided. I still like to do small projects on my domestic or my new George (thanks Hubby!). If you're interested in having me quilt your top, see my Long Arm Quiltingpage. 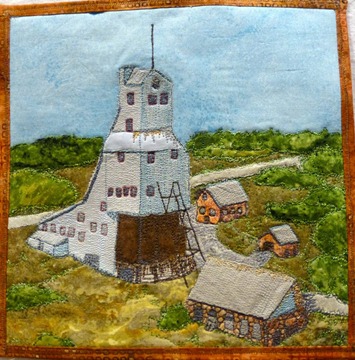 This is a quilt of the Quincy Mine Shaft in the Upper Peninsula of Michigan near Hancock. I made it for my son, Nathan, and his wonderful bride, Liz because they challenged their guests to "decorate" their RSVPs. This is my answer to their challenge. It's tiny, only about 8 x 10 inches and has extensive thread painting on top of raw edge applique. Made in 2014.